At a school I visited recently, the teacher was faced with the challenge of getting some rather reluctant, low level 4 Year 9 boys, to complete a piece of extended writing. The primary focus was WAF 4 – structure and organisation.

The first thing that the teacher did, which would break all of the Ofsted ‘rules’, was to NOT tell the students the purpose of the lesson. Brilliant. Or madness, you might be thinking? Well, he had a reason. What he did instead was to give the students this photograph, of a little boy sitting on a bench in the park. And a piece of paper. The instruction was to just write down whatever came into their heads. 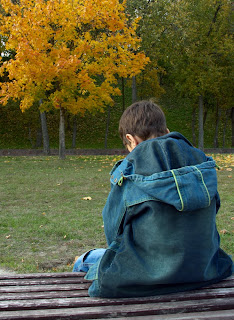 He then gave them this sentence starter:

A little boy sits on a bench.

Students wrote this down, and were then asked to think about what the little boy is wearing, what is on his feet, whether he is carrying anything, what might be in his pocket, what he might be looking at, the expression on his face, and so on. After a while the teacher stopped talking and the students wrote a few ideas down. He then stopped them: just before they wanted to stop.

The second sentence was displayed:

The bench is in the park.

The students were told to start a new paragraph with this line. Again, the teacher gave them some ideas: the weather, the time of day, what is around the little boy, what kind of bench it is, and so on again.

And again, they were stopped with:

From time to time, he sees / hears / smells…

This was followed by:

The little boy thinks about / remembers…

It begins to get dark. The little boy…

This group of extremely reluctant, quite challenging boys wrote, solidly, for an hour. Towards the end of the lesson, one suddenly looked up, looked around the room, looked at the teacher and announced very loudly: ‘Do you realise we’ve just written two pages in paragraphs?’ He then turned to the teacher and said ‘You know what you’re doing, you, don’t you?’ This was a really lovely moment to watch.

Sarah DarraghEnglish Teacher and author of A Bridge to GCSE English