In case you haven’t yet explored it, Wordle is a programme which creates ‘word-clouds’ from text you provide. The clouds give greatest prominence to the words used most often in the text and the programme allows you to edit the layout, font and colour. At first I thought this would be a novelty for my classes to see the text in a different way but, after I began to play around with the editing tool, I realised that this could open up an exciting range of possibilities for my students.

And so it was my year 10 class who were first presented with Wordle. As we were studying ‘A Christmas Carol’, I inserted a short extract about Scrooge from Stave One into Wordle and played around with the font, layout and colour until I felt that it looked suitably ‘cold’ and ‘miserly’.

I began the lesson by displaying the Wordle and asking the students to consider which words stood out and why. This led them to think about the most prominent words and therefore the frequency with which Dickens had used specific vocabulary choices. We then were able to consider which words they thought should be the most prominent and why. I was really impressed by how quickly this focussed the students’ on the effects of language choices and the writer’s craft-skills which I can often despair they never seem to get the hang of! The use of colour and font also enabled the students to quickly enter into a discussion about mood and atmosphere. It wasn’t long before they were creating their own Wordles and making these choices for themselves. 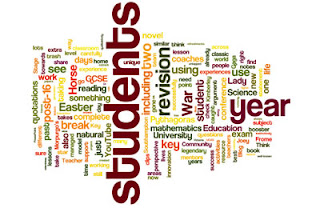 Show us your wordles!  How are you using these in class?