‘Mr Morton is the subject of the sentence, and what the predicate says he does.’

So says the catchy Grammar Rock anthem.  Never heard of it?  Then try typing Mr Morton into Google and see what you get. Yes, he really is that famous!

Of course, you may be questioning the value of a 1993 U.S. elementary school cartoon voiced by a Frank Sinatra sound-alike – especially if you happen to teach secondary school English in a tough UK inner-city comprehensive to bored, pseudo-sophisticated teenagers who are far more street-smart than the hapless Mr Morton could ever hope to be. Well, it’s a starting point – an eye-catching and fun introduction into the murky world of sentence grammar. 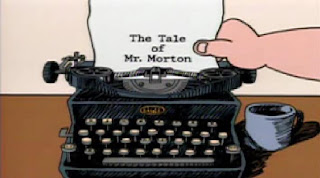 But why bother with such a last-century approach, especially when the current curriculum is already jam-packed with hopelessly ambitious aims and objectives? Well, regardless of whatever GCSE English syllabus you are following, students need to be able to write grammatically correct sentences and use a range of sentence structures for effect, especially if they want to achieve the higher grades. So if they don’t have the basics of sentence grammar, how are you going to convey this to them?

You could always fall back on such standard first-draft comments as: ‘You need to vary your sentence openings more’. Or you could go all out for a first-rate fudge with the catch-all: ‘You must use a wider range of sentence structures!’ But this is all rather vague and meaningless to a student who has no idea what a sentence structure actually is. So how much should you tell them?  In all honesty, as much as they need to know AND as little as possible – just as much as is required for you to engage in a meaningful dialogue after you have proof-read a rough copy.

At the very least, you might teach them that:

Of course, there is no need to teach all of this in one go; it seems an appropriate theme for a year’s worth of starters!

So what will the end product look like when it’s all been assembled? That is the acid test. Hopefully, you will be thrilled with the result, especially if your students have also learned how to use commas to demarcate clauses where necessary. Assuming that all of the above has been successfully acquired, you should certainly have an extensive array of sentence openings.  This newly acquired mastery of sentence grammar might well inspire your students to even dizzier heights and the ensuing sense of personal achievement could ultimately be compounded by dazzling GCSE grades. Finally, if you have also managed to introduce them to the seductive art of the embedded clause, their future output may even look a lot like this!