“Roll up, Roll up!”
Teaching persuasive writing through role play

Teaching persuasive writing can be tricky. You can show your pupils emotive speeches, give examples of devices and look at leaflets but ultimately you tend to find the odd pupil who just hasn’t got it or uses devices in a tokenistic way. This is understandable; you have to really believe in something to be truly persuasive and engaging and those pupils who tend to ‘bob along’ can miss the mark. After three lessons of feeling like I was force feeding knowledge into a fairly unwilling but polite class who nodded along at the right times, I decided to revamp the scheme of work and start again, cue ‘Market Place Persuasion’.

The pupils’ assessment was a leaflet welcoming people to an Island they created. On large pieces of sugar paper I had them write down all the positive elements of their Island and why we would want to visit. They then set their expenses for a week’s holiday and started to practise their ‘hard sell’ – this included terms they came up with, as well as the whiteboard covered in terms that would help them raise a level, (such as ‘rule of 3’, ‘alliteration’ ‘hyperbole’ and ‘metaphor’). To clarify further we did some role play demonstrations for this first, with me being the pushy promoter trying to extract money out of not-so-willing and sceptical volunteers. This took a lesson and was the preparation for our ‘Market Place’ lesson. 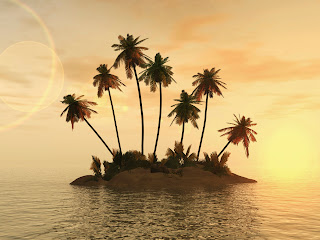 Next lesson the pupils poured in full of high spirits and with arms full of props (some had sweets to bribe people, others had buckets and spades, one boy had a baseball cap and shades to help him ‘impress the ladies’). I handed out Monopoly money (if you don’t have this – and have checked with your maths department – make blank cheques) to half of the class, the other half ‘set up their stalls’ by rearranging tables, eye-balling friends and revising their ‘hard sell’ vocabulary. The ‘customers’ had 20 minutes to buy a holiday to the Island of their dreams.

I am not going to lie, it was loud and busy BUT it was fantastic to watch. Not only did I hear the devices we had discussed being used, but also wonderful bartering skills and some suspect sale methods! After 20 minutes I asked the customers to stand next to the Island they chose. I was pleased to see that they hadn’t just stuck with their friends and we had a clear winner judging the wedge of ‘cash’ he was waving around.

After a round of applause the customers sat back down and filled in a Post It with the things they liked about the Island they had picked and a suggestion for one way the Island could be improved. We then repeated the exercise so the customers became vendors. Jamie was the overall winner as he had the best vocabulary, best deals and most exciting ideas… he also bribed pupils with mini Mars bars but the pupils earnestly assured me he would have won anyway.

The following lesson pupils had their Post Its back and used them to improve their ideas and vocabulary, I also noticed that they discussed how to improve with classmates and asked the more successful vendors for advice. 92% of this class had a writing level of 5b, after this task and careful drafting 71% of the class proudly produced work at level 6. I honestly think it was due to this activity and have since used the model when teaching transitional writing and persuasive writing at GCSE. It also works brilliantly in Media lessons if pupils have made products such as CD covers or magazines. It is best to try this after the first draft so pupils have the time to amend their work before the final draft is due. It makes the pupils more passionate about their subject and lifts it from the page into a real life situation and environment.