To help our students make sense of history quite often we generalise, so Hitler’s war becomes Germany’s war, where all Germans are involved in fighting against the Allies.  During the Industrial Revolution all factory owners were oppressive, making their workers work very long hours for very low pay and beating them if they didn’t toe the line. I’m sure you can think of lots more examples from your own schemes of work.

But things are not quite so simple. For example, at one stage during World War Two, in the South of France, the head of the Gestapo was a Frenchman, and the leader of the French Resistance was a German! And of course some employers in C19th Britain built model factories [Titus Salt, the Cadbury brothers] and made children go to school for half a day before they were allowed to work [Robert Owen.]

The Church, we teach, was a force for good in people’s lives, encouraging them to live decent lives, not to cheat, or lie, to follow God’s teaching. But what about this example? 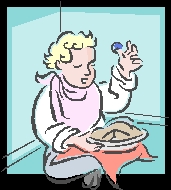 Little Jack Horner sat in the corner, eating a Christmas  pie:
He put in his thumb, and pulled out a plum,
And said, “What a good boy am I!”

But do you know the real story behind the nursery rhyme?

‘Jack’ Horner was the steward of Richard Whiting, the last Abbot of Glastonbury, in the sixteenth century. His real name was Thomas, but, as in playing cards, a ‘knave’ was always known as ‘Jack!’ At the time of the dissolution of the monasteries, Thomas Horner was sent by the abbot to take a pie to Henry VIII in London. The pie contained a gift of the title deeds of twelve of the richest manors owned by Glastonbury. The Abbot hoped such a gift might persuade Henry to leave his abbey alone. The deeds were ‘baked’ in a pie partly to captivate the King (it being the fashion to have novelty pies at table – remember the ‘four and twenty blackbirds baked in a pie?’) and partly as a protection from highwaymen. The story is told that Thomas Horner ‘dipped’ his fingers into the pie and removed the deeds to Mells Manor, the biggest and best estate of the twelve in the pie – hence pulling out the ‘plum.’

True or not, the Horner family moved in to Mells Manor shortly after the dissolution of the monasteries, and a descendent of Thomas was still living there in 1975. This story first appeared in print in 1764.

What a terrific way to bring Henry VIII and the dissolution of the monasteries to life. An abbot – a leader of the Church – resorting to bribery and skulduggery to try to keep his abbey open; a trusted servant of the Church who steals in order to feather his own nest; a king who is obviously after money and susceptible to bribery – why else would the Abbot have tried to bribe him? Doesn’t that humanise the topic in a way that is often missing from our textbooks? Doesn’t it put another perspective on Henry’s struggle with the Church? And you thought it was all about having a son to rule after him. As I said, history is complicated!