Who do we remember?

We are all familiar with the two minutes silence on Remembrance Day, at 11.00 am on the 11th November, to commemorate the end of World War One. It was introduced in 1919 to commemorate all those who lost their lives during World War One. The main national focus is on the Cenotaph, built in 1919-20, in Whitehall, although all war memorials around the country feature wreath-laying ceremonies on Remembrance Sunday [the second Sunday in November.]

Remembrance has since been extended to include those killed in all conflicts since 1914, including the Falklands, Iraq and Afghanistan. Indeed recent conflicts have been instrumental in the reintroduction of the two minutes silence on November 11th itself, as a mark of respect for military personnel killed in those most recent of wars.

But who are we remembering, and why? There has been much emphasis recently on Diversity in history, and an increased recognition of the part played by Empire and Commonwealth troops in Britain’s wars. See, for example, Black and Asian soldiers of the First World War webquest: http://www.comptonhistory.com/ww1webquest.htm. But what about our Allies during World War One?

Russia, we know, fought on the side of the Allies, on the Eastern Front, until the Revolution of February 1917, and finally made peace with Germany at Brest Litovsk in March 1918. But from the middle of 1917 Russia was fighting a ‘defensive’ war. Who can forget that scene in the film ‘Dr Zhivago,’ when a column of new troops is heading for the front and meets a mass of Deserters who persuade most of them to turn round and go back home after shooting most of their officers? Russia, of course, played no part in the war on the Western Front, so how do we make any sense of this gravestone in a cemetery in France? 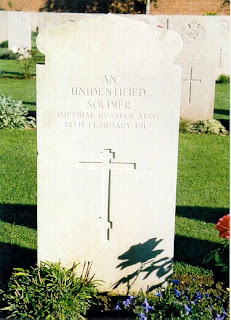 What was he doing on the Western Front? Why is he buried there? A single photograph can open up our preconceptions of World War One, and prompt lots of questions. History, it seems, is much more complicated than the textbooks suggest!