The sun is shining (or it is as I write this) and when using this activity I can give a positive response to the regular question from students – ‘Can we go outside for this lesson?’

This is an activity that could be used to develop the idea of loci before working on constructing them.  This is a strategy that students could find useful later when working on paper, especially as I have found that many of them get engrossed in problems of doing accurate constructions before they have a clear idea what it is that they are about to construct.

As a whole class outside:

Each students is given some chunky chalk (The thinner sticks lead to some painful breaks on the nails!!)
You could ask students to go and stand so that they are
•    5 metres from a wall

Working in groups of four or five outside:

Each group is given a card on which the conditions for the locus of a point are written.
You can differentiate the tasks set for the groups where necessary. Two examples are shown in the table below, and these include ways in which the students could extend the task set.

They are asked to move to their own areas and to use the same strategy of marking and moving in order to sketch the locus of the point.  They need to make their own notes in order to describe this to others on return to the classroom.  As you move round the groups discuss with them how they would construct these accurately.  They are often quite inventive and these can be drawn on when showing them other ways to produce accurate drawings of these.

And back in class:

Students should then produce a poster to explain the shape of the locus of the point for their conditions.
These can then be used with them on future work on making accurate constructions 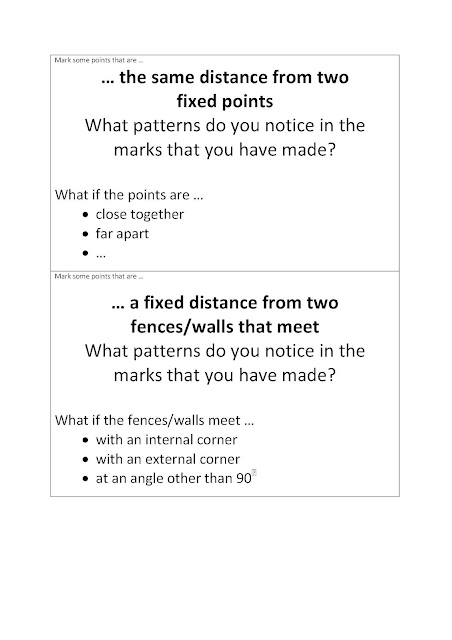