Writing about issues such as domestic violence, you always risk sounding preachy. It is easy to let your desire to do the subject justice take over the narrative.

When I started writing The Edge, I knew that the story had to come first. If you overload it with worthy ideas, it can become sluggish and wordy. So how was I going to keep it ‘pacey’ and involving for my teenage readers? 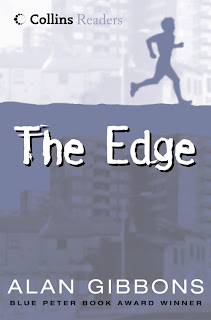 I am a huge movie buff, so the answer was staring me in the face in the form of film’s use of cutting from one character to another. This is a staple of the thriller and horror genres. There is a shot of somebody walking along a dark, rain-swept street. He turns and sees a silhouetted figure. The camera peers at the quarry over the shoulder of the pursuer. You hear their breathing, see the revolver in his hand. Then it is back to the quarry, his quickening pace, his growing panic.

The Edge is a chase, the pursuit of Cathy and Danny by the abusive Chris. That set the tone of the whole novel. The opening chapter begins with Cathy shaking Danny awake. They are about to flee, but Chris is suspicious. From that point on the narrative is developed in a series of mini-chapters – essentially scenes. The emphasis is on pace and the rhythms of flight and pursuit.

There is a second reason for the format of multiple-narration. I had read several novels about bullying and victimisation that I found too black-and-white. The reader empathised solely with the object of terror. The story was reduced to good guy, bad guy. I found that far too simplistic. By seeing through the eyes of Danny, his mother, his grandparents, Danny’s estranged father, even the monstrous Chris, the novel makes demands of the reader. You confront ambiguities. You see the way people justify their actions, even when those actions are terrifyingly damaging. In other words, the multiple narrators allowed me to make the story more subtle and nuanced.

Can one narrative style combine both pace and subtlety? Read The Edge and judge for yourself.
Now, get writing.

Download this free writing activity PowerPoint for your classroom and try your hand at writing the first chapter of The Edge 2: A sequel.

Alan Gibbons trained as a teacher and through working with young people discovered his literary voice. He started writing fiction for his pupils and published his first novel in 1993. Alan has also appeared on the BBC education programme Writer’s Block, the Blue Peter Book Awards, radio 4’s Front Row, and is a regular contributor to TES, Junior Education, Carousel, Books for Keeps and other journals.