Teaching the language of metaphor can be a real hurdle, even with the most able students. Sometimes we can forget that in an average day, our students have had four or five blocks of learning in subjects where content tends to drive the curriculum – when they arrive at their English lesson, hoping to be given some ‘things to learn’ to help them pass their exams, it can be quite disconcerting to be confronted with the ‘what do you think?’ approach that English teachers know works best. Because we teach a skills-based curriculum, especially at Key Stage 4.

One of the poems in the AQA Moon on the Tides Anthology is a great piece of polemic called ‘Checkin’ Out Me History’ by John Agard. This poem prompted one of the best lessons I have ever had the privilege to see in terms of opening students’ eyes to the ways that the language of metaphor is open to interpretation.
It started with the word ‘beacon’ on the board. The whole-class activity was to simply throw ideas at the board (this was done with sticky notes, but could be done in a variety of alternative ways) about what this word might suggest. At the end of five minutes, the board was full.

Students were then put into pairs. Each pair had a sheet of A3 paper with one of the following phrases from the poem. Their task was the same – five minutes to come up with as many ideas that their phrase suggested. At the end of five minutes, the A3 paper was passed to the next pair…and so on.
•see-far woman
•of mountain dream
•fire-woman struggle
•hopeful stream
•to freedom river
•a healing star
•a yellow sunrise

The activity lasted for the whole lesson. At the end, the instruction was to choose one phrase which the students had particularly liked, and write a paragraph explaining what the use of that phrase suggested about the ideas in the poem. As you might expect, the results were astonishing. 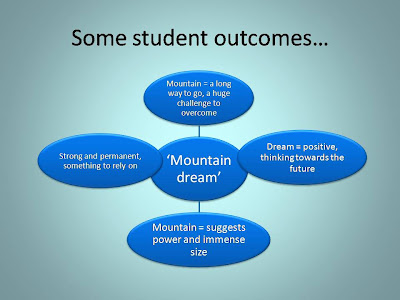 The most significant part of the learning experience for the students was that their ideas have weight and merit, and that one of the key aspects to becoming a successful Literature student is having the confidence to explore their own ideas – that there is no ‘right answer’, and it is always what the student thinks that is far, far more interesting than what the teacher thinks!

Sarah DarraghEnglish Teacher and author of A Bridge to GCSE English